"Dr. Colliver – I can’t possibly thank you enough for your expertise in surgery and your time spent talking with me about my concerns and fears before and after the event. The removal of an organ was a frightening thought to me since I had not experienced any other major surgery in my life. However, your kindness and your confidence in the success of the surgery gave me the comfortable assurance I needed to get through it. You helped me when I needed help and now, I feel good! I am sincerely grateful." 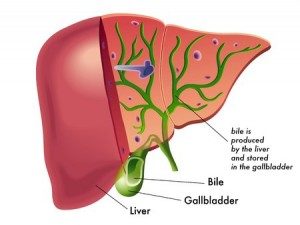 Most gallbladder surgery is done for people who have symptomatic gallstones. Common symptoms include right-sided or upper central abdominal pain, which commonly occurs after eating fatty or greasy foods. The pain can be associated with nausea, vomiting, and / or a bloating sensation. The pain can also radiate into the back and/or right shoulder. A small percentage of patients have these symptoms without gallstones, but can be shown to have gallbladder dysfunction. Gallbladder dysfunction is identified on a test called a CCK – HIDA which measures how well the gallbladder functions.

All patients have an ultrasound of the gallbladder, liver and bile ducts. Other imaging tests may be ordered if necessary. Routine blood work and x-ray studies are ordered prior to surgery based on the patient’s age and the presence of any existing medical problems. Patients should not eat or drink anything after midnight the night before surgery. Drugs such as Coumadin, Plavix, Aspirin and anti-inflammatory medications should be stopped before surgery.

Laparoscopic gallbladder removal is performed under general anesthesia and involves four small incisions less than one-half inch in length. A camera is inserted into the abdomen through one of these incisions. The other incisions are used for the insertion of instruments the surgeon uses to remove the gallbladder instead of making a large incision as was commonly done in the past.

Gallbladder surgery can usually be done as an outpatient. Some patients require extended observation, with discharge later in the day or the next morning. This occasionally is required in elderly patients, those with other medical problems, or in patients who may be nauseated or uncomfortable postoperatively.

This seems to vary from patient to patient. Some patients return to work shortly after surgery, others require several weeks until full recovery. On the average, one to two weeks after surgery patients are ready to resume all normal activities.